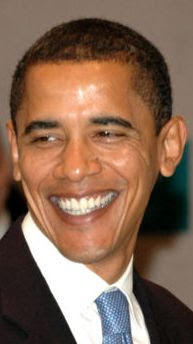 Campbell Brown, who is too young to remember, finds some of the common threads that link 1968 to 2008. I'm too young myself to have mature memories, but I remember the titanic struggle America fought to try to grow into the outsize ideals that the Founders and Abe Lincoln and even FDR left still unrealized.

I remember a time when political violence robbed us of the people who might have led us from the mountaintop to the promised land - JFK, MLK, and RFK - a time when hope for a new flowering of freedom and democracy died a-bornin'. And Richard Nixon won the Presidency.

This is why those of us of a certain age feel gnawing fear even as we rejoice at the possibilities and promise of Barack Obama. To live in fear is to die by degrees, but I hope Obama listens to his Secret Service detail.

Image from Wikimedia Commons under CCA 2.0.

Posted by lovable liberal at 5:19 PM

There's an old saying, quite possibly over 40 years old: "Only a fool does the same thing over and over expecting different results".

These "parallels" Campbell describes go on: shortly after Wooodstock, the US experienced an oil crisis in '73 leading some of us to trade in our Fords for a VW Super Beetle.

Europe was just a tad behind, but left-wing - sorry, "alternative" -parties burgeoned, and even terrorist groups like ETA and RAF hailed as "necessary evils". There was excitement in the air, along with the toxic fumes of burning Molotov cocktails decrying the destruction of the ozone via nuclear energy and stuff.

The German Green Party entered parliament in '83, its members wearing Palestinian kaffiyehs, sandals, scraggly beards, lambasting the powers that be, literally cussing the Establishment to the cheers of the masses, who hoped it would avert Ronald Reagan's planned nuking of Europe for profit, and to kill them goddamn godless Commies. Sound familiar?

But lo! all of a sudden there were these new-wavers and yuppies eveywhere. And a few years later the one and only Green Party God Joschka Fischer took to wearing a suit and tie as Germany's foreign minister.

"Only a fool does the same thing over and over expecting different results", ultimately leads to nothing more than "history repeats itself".

Thing is, gravity is omnipresent everywhere, inevitably pulling everything - the Movement, Revolution, whatever you want to support, chant for and even idolize - 6 feet under. Which leads us to even more sayings: "All is vanity" and "the journey itself is the destination".

Still beats rote crap like: "not in my name".

Time will reveal Obama as a mere mortal, too, a "Halfrican-American" when, say, free health care doesn't ensue immediately after his taking office.

American presidents will always suck any which old way in the eyes of the world. Check out the Dems downright ugly revision of their very own Clintons.

Weaning ourselves off expensive oil will not endear us to those millions soon to be living on nothing but sand on top of worthless oil.

To make a long story short (saving electricity in the process!): I remain wholly unimpressed by these supposedly heady new times, much less the human race in general.

If you dig looking deeply into them old pictures, check out Ted Kennedy's eyes before and after his seizure.

Thats gravity at work right there.

How dare Campbell Brown compare Obama to RFK?That is the most insulting remark I have ever heard!Obama had done NOTHING compared to RFK! The crowning the media has done to Obama since he won Iowa! The media bias I have witnessed for Obama is crazy! The media has bent over backwards not to seem racist against Obama.Instead you let this bias ruin the campaine of Hillary Rodham Clinton.

I want to know how someone can go on national television who was literally in diapers in 1968 and not even old enough to walk can sit here and draw parallels to RFK and Obama. Yes all these events happened in 1968 and Brown was born in 1968, that would be like me trying to explain the 1981 inaguration of Ronald Reagan when infact I was born in 1981. I'll explain what happened because I like history but I'm not going to try and enforce my views and try to draw parallels to something that happened the year I was born when I was too young myself to remember. Thats just ridiculous and idiotic.

No kidding. Not only does Campbell Brown not remember, she's a slimy "embedded" Bushie posing as an impartial CNN reporter. She's a neocon apologist trying to give her backwards view of a history she has no clue about since she wasn't old enough to remember. "I remember 1968--the pablum in my baby bottle seems so much like the pablum I spew on TV today." She's an empty talking head, not even worth turning on the TV for.

Anonymous, the blogosphere needs your misanthropy and helplessness, though I recommend you adopt snark as your tone when you start your blog, rather than your current shotgun blast of 360° attacks. But keep at it. One problem: If nothing matters, why are we all still talking? We could all be stupid or insane, so more to the point, why are you still commenting?

rldavis70, I think your point would naturally exclude all judgements from history by those who didn't live through it, and greenparty2008 agrees (all the way from Korea - welcome!). The media did romance Obama for a while, but turned on him as they always do. Hillary's problems were primarily Hillary's. But it's true that Obama doesn't have as powerful a resume as RFK did in 1968.

Of course, you're all right if you think Campbell Brown and CNN could only possibly skim the surface, since that's about all they ever do!

"If nothing matters, why are we all still talking? We could all be stupid or insane, so more to the point, why are you still commenting?"

"Of course, you're all right if you think Campbell Brown and CNN could only possibly skim the surface, since that's about all they ever do!"

"If nothing {Campbell Brown i.e. CNN] writes matters, why do her detractors comment at all?"

Why bother posting about them? It just reveals your misanthropy and helplessness. May I peruse your blog to find evidence supporting your being "lovable" by independent non-sponsored, non-partisan sources?

Anon, knock yourself out.

That last comment, though, is pretty silly. Try to set a little context.

But, here at LL, talking to yourself is allowed.

This anon contends that there is nothing new under the sun. And to compare Obama to RFK is to set ever bigger shoes in front of him that he won't ever be able to fill. People just don't grow that large anymore.

Remember the glee when (Dem) Lloyd Bentsen pwned Dan Quayle:
"Senator, I served with Jack Kennedy: I knew Jack Kennedy; Jack Kennedy was a friend of mine. Senator, you're no Jack Kennedy."

Now Google "worse than Hitler". Just about everyone has been called that by now.

When - not if - Obama fails to deliver his voters' outsized ideals and expecations, talk will soon turn to his being too black, or white, or priviliged, or thwarted by vast conspiracies.

RFK was a rich kid, too, what did he know about the "suffering" he mentioned in the wake of MLKs death?

You speak of gnawing fear as you rejoice the possibilities and promise of Obama.

I say skip the party, lose the fear, quit the mob, let Obama prove himself and, most important of all, let him take credit/responsibility for his achievements/failures instead offering endless excuses along the lines of "vast right wing conspiracy".

Before I die I would during my lifetime see humans just once refrain from their usual dim, rote, boring, tedious, blaring mob-inspired repitition, these days made all the more convenient by the Internet.

RFK himself said:
"Fear not the path of truth for the lack of people walking on it."


LL says: "That last comment, though, is pretty silly. Try to set a little context.

But, here at LL, talking to yourself is allowed"

You are so not RFK.

I am so not trying to be Bobby.

Probably the happiest day will be the day Obama is (I hope) elected. After the dreams, reality comes. It came in a big way for Bill Clinton, and he frequently blew it. I'm sure President Obama will too, if that comes to pass.

I, too, think Obama can and even should be president. I've no objection to that at all.

"DEMOCRATIC White House hopeful Barack Obama has quit his Chicago church because of racially tinged rhetoric by preachers from its pulpit.

Senator Obama's decision to resign his 20-year membership of the Trinity United Church of Christ followed inflammatory remarks by his long-time pastor, the Reverend Jeremiah Wright, and more recent fiery remarks at the church by another minister."

20 years is a long time.... But the odious, chronically idolatrous masses respond with blind devotion:

This works both ways and its all rather ho-hum in its complete and total lack of creativity.