Obligatory media criticism:  When was the last time you heard a reporter challenge a Republican with something that a loony leftist said?

After getting results from my town in the Massachusetts special election to replace former Sen. John Kerry, I tuned in WBUR for a little NPR vamping until the full results were in. Renee Loth, late of the Boston Globe, managed to offer a couple of factoids in the space of five minutes that were bullshit:


There was another one, but after basketball and beer, I don't remember it. If only Loth had had the stones to acknowledge her lack of memory.
Posted by lovable liberal at 2:36 AM 2 comments

Here in the U.S., we're getting jammed.
Posted by lovable liberal at 5:23 PM 0 comments

Loyal opposition would care about facts

The Republicans are interested only in their own power. Yet another faux scandal, this time the IRS's so-called targeting of teabaggers, has crumbled:


Terms including "Israel," ''Progressive" and "Occupy" were used by agency workers to help pick groups for closer examination, according to an internal IRS document obtained by The Associated Press.

It was obvious from the beginning that the IRS personnel in Cincinnati were using search terms - the way anyone facing a large backlog of work would - to screen for high-priority work. If you don't do this, you're not getting the right work done. You're treating every task as equal in priority and equally likely to pay off. In short, you're an idiot piece-worker.

Republicans should have known this before going after scalps. Instead, they contrived exposure of only the part of the story that fit their apocalyptic victimology. I have no evidence whether they knew and deceived us or whether they simply didn't ask. Those are the two options, and either is unforgivable for the House Oversight Committee and its chair, Darrell Issa (R-police record).

It's long past time we acknowledged that their opposition to Barack Obama goes well beyond honorable, time-honored loyal opposition. They are not loyal to Americans, only to their extremist supporters.
Posted by lovable liberal at 1:53 PM 3 comments 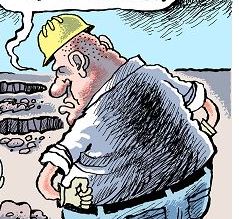 Posted by lovable liberal at 12:35 AM 0 comments 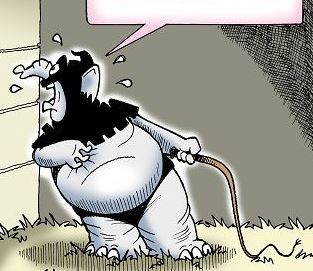 Do they think they're the government?


The personal information leaked by the bug is information that had not been given to Facebook by the users - it is data Facebook has been compiling on its users behind closed doors, without their consent.

Governments have never been able, long term, to distinguish dissidents and subversives from revolutionaries and enemies. Corporations just want to sell us more useless plastic shit.
Posted by lovable liberal at 10:46 PM 0 comments

Conservatives are frothing at the mouth (again! You'd think they'd run out of froth) about President Obama's completely innocuous comments about schools and communities separated along sectarian lines in Northern Ireland.

The reason our homegrown American paranoid wingnuts are angry about this - other than anger being what they do - is that they've spent the past forty years building separate institutions parallel to public and secular institutions.

Their building started as a way to keep their delicate little white babies from having to learn with colored chillun. You never know what might happen when children sit next to each other in class. They might become friends! Or those dark boys might deflower innocent Southern girls. Mongrelization, miscegenation, race-mixing, and bastardization of America!

After resegregating K-12, of course, the racist wingers needed "higher" education that would permit their smallworldview to go unchallenged all the way through college and even grad school. But you can't say cadres for Christ - that sounds too much like the Bolsheviks. Hence Bob Jones University (BJU, unintended double entendre foreshadowing teabagger) and Liberty University. Too bad Oklahoma's ORU wasn't named for a televangelist named Oral Richards.

Then of course, the conservatives built their own media, intended from the beginning to get their story our, never mind what's true. Fox pretends to be news to pump out propaganda. Rush and his ilk of haters purvey unguested confrontation and won't countenance any response on their bullshit programs.

Well, not quite never mind what's true. Some viewers need a little convincing. So billionaire wingnuts built tax exempt foundations to provide a thin veil of propaganda for the alleged truth of their views. Heritage Foundation, American Enterprise Institute, Accuracy in Media, and all the various denier "think" tanks on climate change, tobacco, and the so-called free market, etc.

Drastically at odds with the Christian Bible, yet the Republican Party claims to be based on both. Debased, more like it.

A self-described Christian who holds at the same time the morality of Jesus and the contradictory "virtuous" selfishness of Ayn Rand must believe, among other absurdities, that every charism from god to human must stop there and not be shared with any other human.

The Christian conservatives I know don't actually believe Rand's philosophy. They are often altruistic within their own circles, and their churches are often valuable social welfare providers. Why is it that they adopt her anti-altruism extremism in regard to every economic issue?

James Taranto is feeling a bit put upon by all the great women who can tell after 30 seconds of listening to him that they will never sleep with him. The mere thought skeeves them out. They're thinking, "If I can just get away from this perv, I'll never have to breathe the same air again."

It's totally understandable that Taranto would mistake a war on pervy creeps for a war on all men. Totally.

The conservative movement is founded on twin implausible literary pillars.

One is Ayn Rand's fictional philosophy, epitomized by the execrable and ridiculous Atlas Shrugged. Calling it literary immediately demands an episode from Leonard Pinth-Garnell.

The other is an ossified literal reading of a notoriously dated translation into English of the bible. At least it has true literary merit, but anyone who labels it the inerrant word of god is either whoppingly ironic or resolutely opposed to learning. The King James translation was done a millennium and a half after the New Testament was written, written often by authors who lied about who they were and whose works have been canonized more theologically and politically than historically.

It's no surprise then that conservative Republicans in the House today spin tales they can't substantiate to outraged true believers.


Congressional investigators have not produced evidence to link the harassment of conservative groups to the White House or to higher-ups in the Obama administration. But the lack of evidence that any political appointee was involved hasn’t stopped the lawmakers from assuming that it simply must be true. And so, they are going to hold hearings until they confirm their conclusions.

Americans love soap operas. Who cares that these daytime dramas are at best semi-plausible half-truths!
Posted by lovable liberal at 1:02 AM 2 comments

Critique from the left

Of liberalism, too often bought off by conservative corporations:


Corporations write our legislation. They control our systems of information. They manage the political theater of electoral politics and impose our educational curriculum. They have turned the judiciary into one of their wholly owned subsidiaries. They have decimated labor unions and other independent mass organizations, as well as having bought off the Democratic Party, which once defended the rights of workers. With the evisceration of piecemeal and incremental reform — the primary role of liberal, democratic institutions — we are left defenseless against corporate power.

Of the current ugly capitalism itself, less restrained every day by anything moral:


A handful of corporate oligarchs around the globe have everything — wealth, power and privilege — and the rest of us struggle as part of a vast underclass, increasingly impoverished and ruthlessly repressed. There is one set of laws and regulations for us; there is another set of laws and regulations for a power elite that functions as a global mafia.

Between the lines, Hedges visibly calls for revolution. He doesn't call for violence the way so many Teabaggers do, but he has put my liberal program behind him for direct action and presumably peaceable rebellion.
Posted by lovable liberal at 11:54 PM 2 comments

They have refused their Assent to Laws, the most wholesome and necessary for the public good 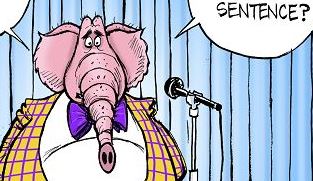 Voter suppression is no accident