Want a friend in Baghdad - get a dog 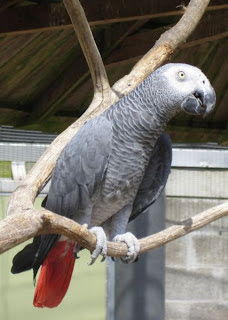 Well, maybe instead an African gray parrot that says, "Down with Bush!" Sounds pretty smart - I hear Brandeis has an opening for an intellectually talented African gray.

Baghdadis care enough about pets to venture again to al Ghazl market, which has been bombed again and again. While I doubt they treat their pets as if they are their children, the way we Americans do, this still says much about their humanity.

The CNN story is really two stories, probably the one filed by the local stringers Ahmed Taha and Jomana Karadsheh and the other massaged with the official U.S. government line by CNN editors. In the Iraqi story, the bombers were Down Syndrome dupes; in the American story, vicious terrorists. Iraqi, 98 dead, 200 wounded; American, 27 and 53.

There's something unique in the writing of this story, too. It reads like a report that's not determined to contribute to a specific narrative. It contains the obligatory spin quotes from Americans, the interpretations that could well be true but which are given too prematurely to show any deference to the slow truth of what actually happened.

Maybe we should try treating people from the rest of the world the way we treat our pets.

Image from Wikimedia Commons under GFDL.

Posted by lovable liberal at 8:16 PM