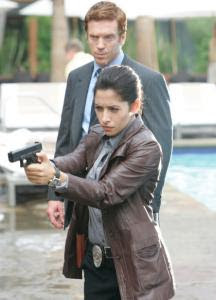 I watch a lot of small screen - sports, movies, nerd shows - but, except when my daughter has the remote, hardly any TV shows.

One show I found in the fall that I liked a lot was Life, starring Damian Lewis, whom I had last seen in Band of Brothers, which was terrific. Lewis doesn't have a large range of emotional expression, but I like what he does with what he has. And I'd watch Sarah Shahi wash dishes - after all, her small range of emotional expression plays across that gorgeous Persian face. I've had a crush on Brooke Langton since The Replacements, and she is subtly expressive in this role. And I've enjoyed Adam Arkin's quirky roles since Northern Exposure.

What I like about Life, though, is the writing, which shows the characters searching for calm in a chaotic world. I used the writers' strike to catch up on the eleven existing episodes by watching them all online.

It's ironic that the WGA strike drove me to the exact medium they deserve a piece of, but this would have happened in any case because I just don't do appointment viewing, haven't since day 4 of 24. TV is all going to be online eventually. Sporting events will show live; will anything else?

We're not there yet. NBC's posted episodes are technically awful, heavily pixelated and in a display tool that really sucks. They're trying to preserve DVD properties, I guess.

NBC is not spending a lot online, probably because they're not making a lot. I am so sick of Vera Wang's Serta commercial and Toyota's park-by-braille bonehead that I actually missed longer station breaks with more variety of commercials.

Did the writers win by winning a piece of this? If so, it's a long-term win. There's not much online. Yet.

Photo credit: Trae Patton/NBC - publicity photo used by both the Boston Globe and the NY Daily News, but if you don't want me to use it, just say the word, and it's gone.

Posted by lovable liberal at 8:14 AM