... for the coming shutdown of the federal government, here's something I found interesting. 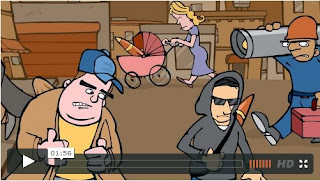 Timothy Egan nails the head-snapping misrepresentation of poor whites by their Teapublican overlords:

Among the 254 counties where food stamp use doubled during the economic collapse, Mitt Romney won 213 of them, Bloomberg News reported. Half of Owsley County, Ky., is receiving federal food aid. Half.

You can’t get any more Team Red than Owsley County; it is 98 percent white, 81 percent Republican, per the 2012 presidential election. And that hardscrabble region has the distinction of being the poorest in the nation, with the lowest household income of any county in the United States, the Census Bureau found in 2010.

Since nearly half of Owsley’s residents also live below the poverty line, it would seem logical that the congressman who represents the area, Hal Rogers, a Republican, would be interested in, say, boosting income for poor working folks. But Rogers joined every single Republican in the House earlier this year in voting down a plan to raise the minimum wage over the next two years to $10.10 an hour.

Instead of voting for their pocketbooks, poor whites have succumbed to a frankly tribal and bigoted appeal that finds fear and threats in blacks, immigrants, and anyone who's different. It's not an accident that the heart of this appeal to the basest of American traditions springs from the South, where it seeks to recapitulate Jim Crow. Never mind what the majority wants, suppress enough votes to keep the aristocracy in power.

The GOP can do this because they've changed the postwar social norm. After WWII, we all knew from the battlefield that we were one nation, all in this great cause of freedom and prosperity together. This made very threatening times for the lords of the manor. They might prosper even more under Democrats than under Republicans (look it up), but they needed greater income inequality to feel better about themselves.

So they took their financial resources and put them to work changing the social norm. Now, we have an entire right-wing media apparatus built for the purpose of convincing their racist teabagger serfs of a thousand things opposite the truth.

But the main new social norm for the conserfatives is the ardent faith that the government and organized labor are the source of their problems, when in fact they are the only counterbalance that exists to the plutocracy that has gluttonously gobbled up all the economic gains of the past thirty-five years and still cannot be sated short of neo-feudalism.


What’s at work here is the poison of ideology. Underlying the food assistance fight is the idea that the poor are lazy, and deserve their fate — the Ayn Rand philosophy. You don’t see this same reasoning applied to those Red State agricultural-industrialists living high off farm subsidies, and that’s why Republicans have separated the two major recipient groups of federal food aid. Subsidized cotton growers cannot possibly be equated with someone trying to stretch macaroni into three meals.

The saddest part: Those people in Owsley County who are made hungry by Republican fealty to the wealthy will continue to blame the government and the United Mine Workers. In a way, the fucking morons deserve to live in a company town. They've failed to live up to their self-image as self-reliant, independent yeoman Scotch-Irish sonsabitches. But the rest of us don't deserve that company town. And their children don't either.
Posted by lovable liberal at 5:32 PM 10 comments

It's your fault if a bullet kills you


Not enough dead yet. 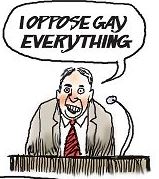 Born free but everywhere in Cheneys

Does anyone really believe that the mild zephyr of packaged controversy between Darth Cheney's daughters Mary and Liz is about equal marriage? Really, it's all about ginning up a fake controversy about which one is the lesbian and which is the arch-conservative Wyoming Senate candidate. Free media!