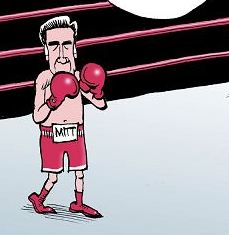 I've been saying for years that Republicans can't win elections without lying. It's sooo lovely to have Mitt Rmoney proving my point again and again.

Old media won't tell you this

For wingnuts watching from their moms' basements, since you make your decisions below the waist, please note that Jennifer Granholm is more attractive than Sarah Palin. Not eligible to be President, since she was born in Canada of Canadian parents.

Just came around for the harvesting...

Forty days to go. Forty days to help your family, friends, and neighbors decide between neo-feudalism and the social compact that has been America since the Great Depression.

Wake the fuck up!

Sewing up the asshole vote

Scott Brown (R-smallpox blankets) has always been arrogant in the way that good-looking people of both sexes can be. They're ornamental - and in his case athletic - so not much more is expected of them. Intelligence? Who needs it? He looks nice, so he doesn't have to be nice. That came through loud and clear in last week's debate.

And I thought the Republicans already had the asshole vote almost completely locked up.

Throw him an anchor

We Democrats and liberals need to aid and abet Rmoney's implosion. The Republicans are showing us who they really are, but it's up to us to let everyone else know.
Posted by lovable liberal at 1:30 PM 0 comments

You don't need a weatherman

... to know which way the wind blows.

Tommy Menino (D-mostly) jumps on the Elizabeth Warren bandwagon just in time to make himself out as the kingmaker on Nov. 7.

The honest truth is that Mitt Rmoney's latest blithering gaffe is exactly what the Republican base voters believe. No matter how many times you show them that federal taxes don't begin and end with the income tax, that our federal tax system is not very progressive, that almost everyone with a good job pays taxes, that members of the 1% of the 1% (the 0.01%) often pay a far lower rate than anyone but the very poor, even the middle class hard-working white guy pulling down a median income around $50,000 a year thinks he's one of the makers and that other guy is a manipulative taker. I've tried to expose this bullshit, to little avail. Even though Rmoney claims this middle class guy needs another $150,000 a year to join the middle class at all...

I think this comes from the shriveled greedy coal-black hearts of the right wingers. They aren't motivated by anything but money, and they don't have any generosity of spirit (outside very narrow tribal boundaries) nor any ability to evaluate a picture larger than their own wallet, so they assume no one could possibly be a Democrat or a liberal without being paid off. They can't believe a member of the 5% like me could possibly believe the country is better off as a whole with a fairer distribution of taxation, income, and wealth. (Note to moron trolls: fair does not mean equal.)

So Republicans will wonder what all the fuss is about, because they lack basic human sympathy. They've got theirs, devil take the hindmost.
Posted by lovable liberal at 2:01 PM 0 comments


Without the checkbooks of billionaires, this man would be struggling to see nowhere. They're simply trying to buy the election for this dope.
Posted by lovable liberal at 12:48 AM 0 comments

Posted by lovable liberal at 9:56 AM 0 comments 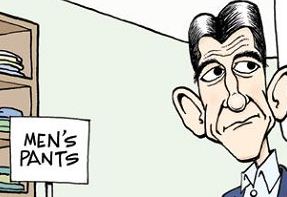 Clearly, the locked-out NFL officials - union members - are better at their jobs than the scab referees who are trying to call the games. And failing.


Two weeks into the regular season, with the N.F.L.’s lockout of its officials going strong, replacement officials have awarded a team an extra timeout in a close game, ruled multiple incomplete passes as fumbles, missed an array of pass-interference and unnecessary-roughness calls, and in one game took six minutes to review a play that they subsequently determined was not reviewable. One referee was removed from the crew of a New Orleans Saints game after publicly proclaiming himself a Saints fan.

I'd like to see stupid personal fouls be reviewable so officials could catch the instigators instead of just the retaliators.
Posted by lovable liberal at 9:48 PM 0 comments

Asleep at the switch

Bushists and neocons might have given their best efforts and still not prevented 9/11. But they didn't even try, despite many warnings:


The direct warnings to Mr. Bush about the possibility of a Qaeda attack began in the spring of 2001. By May 1, the Central Intelligence Agency told the White House of a report that “a group presently in the United States” was planning a terrorist operation. Weeks later, on June 22, the daily brief reported that Qaeda strikes could be “imminent,” although intelligence suggested the time frame was flexible.

But some in the administration considered the warning to be just bluster. An intelligence official and a member of the Bush administration both told me in interviews that the neoconservative leaders who had recently assumed power at the Pentagon were warning the White House that the C.I.A. had been fooled; according to this theory, Bin Laden was merely pretending to be planning an attack to distract the administration from Saddam Hussein, whom the neoconservatives saw as a greater threat. Intelligence officials, these sources said, protested that the idea of Bin Laden, an Islamic fundamentalist, conspiring with Mr. Hussein, an Iraqi secularist, was ridiculous.

Unconscionable.
Posted by lovable liberal at 9:00 AM 2 comments

Republicans have withdrawn their consent of the governed in favor of massive resistance. Elections only have consequences when they win, in which case they govern as if they won a mandate. When they lose, they'll obstruct all implementation of the majority's plan.


As anyone who was paying attention knows, the period during which Democrats controlled both houses of Congress was marked by unprecedented obstructionism in the Senate. The filibuster, formerly a tactic reserved for rare occasions, became standard operating procedure; in practice, it became impossible to pass anything without 60 votes. And Democrats had those 60 votes for only a few months. Should they have tried to push through a major new economic program during that narrow window? In retrospect, yes — but that doesn’t change the reality that for most of Mr. Obama’s time in office U.S. fiscal policy has been defined not by the president’s plans but by Republican stonewalling.

Even those 60 votes included several closet Republicans - not of the Teapublican strain, to be sure, but nonetheless often not willing to side with President Obama. Ben Nelson was probably the most Republican. Joe Lieberman, Kay Hagan, Blanche Lincoln, and Mark Pryor were a few of the other Senators in the 111th Congress who often wouldn't vote cloture.

Nothing the Republicans have done about the economy makes any sense at all unless they are motivated by lust for power more than by the prospect of prosperity for the nation as a whole.
Posted by lovable liberal at 8:30 AM 0 comments

Shut up and watch, wingnuts

The wealthy and their lobbyists and media propagandists want us to believe that they are essential to job creation. Bullshit!


With cunning and contempt and catechismal fervor the super-rich have argued that all money should move to the top, where it will be used to stimulate the economy and create jobs. But they ignore the facts that prove them wrong.

Posted by lovable liberal at 8:30 AM 0 comments


[D]oes Romney think we’re stupid? Hey, he also thinks we’ll buy into his promises to slash taxes by $5 trillion but make up the revenue by closing unspecified loopholes in a way that doesn’t raise taxes on the middle class – which turns out to be arithmetically impossible. So the answer is, yes, he thinks we’re stupid.

Too boring for Republicans to make it add up.
Posted by lovable liberal at 3:21 PM 4 comments


Fortunately for Mitt, he doesn't have a reputation for telling the truth.

It's pretty clear Rmoney is going to rely on an incredible barrage of negative ads from superPAC billionaires.

Update (9/27): Finally had time to relocate the video that I somehow didn't get inserted when I first posted this.

Posted by lovable liberal at 11:49 AM 1 comments

No liability for lying

Mitt Rmoney (R-safe harbor from lies) has spent much of his life approving statements that may or may not be true but which excuse themselves from liability if they turn out to be true. Here's an example from current Bain dealings:


These statements involve a number of risks, uncertainties and other factors that could cause actual results to differ materially from those in such forward-looking statements.

Here's another:
A third:
There are many, many more, of course. Bain's various companies are involved in a lot of deals.

Since Mitt never worked under Sarbanes-Oxley (that we know of), he didn't actually sign these statements, but his cavalier attitude toward making shit up shows in practically every statement he ever makes, for example, this piece of pettifoggery:


According to the candidate's mythology, Romney took leave of his duties at the private equity firm Bain Capital in 1990 and rode in on a white horse to lead a swift restructuring of Bain & Company, preventing the collapse of the consulting firm where his career began. When The Boston Globe reported on the rescue at the time of his Senate run against Ted Kennedy, campaign aides spun Romney as the wizard behind a "long-shot miracle," bragging that he had "saved bank depositors all over the country $30 million when he saved Bain & Company."

In fact, government documents on the bailout obtained by Rolling Stone show that the legend crafted by Romney is basically a lie. The federal records, obtained under the Freedom of Information Act, reveal that Romney's initial rescue attempt at Bain & Company was actually a disaster – leaving the firm so financially strapped that it had "no value as a going concern." Even worse, the federal bailout ultimately engineered by Romney screwed the FDIC – the bank insurance system backed by taxpayers – out of at least $10 million. And in an added insult, Romney rewarded top executives at Bain with hefty bonuses at the very moment that he was demanding his handout from the feds.

Mitt is a gee-whiz liar to the core. He believes his business and his god entitle him to say whatever he needs to say.
Posted by lovable liberal at 4:32 PM 5 comments

The Democrats' problem is that reason only works with a narrow demographic these days. We didn't always have a culture of bullshit, but we do now. Republicans believe they're entitled to their own facts, whatever they make up on the spot to avoid having to deal with actual reality. The radical right-wing media feeds this irrational belief constantly. That's its purpose - keeping the ignoramuses fooled, with their willing, even eager, participation.
Posted by lovable liberal at 3:10 PM 0 comments