Curt Schilling suckled at the public teat and now blames the state of Rhode Island for his own failure to live up to his obligations:


38 Studios, which was lured to Rhode Island from Massachusetts in 2010 with a $75 million loan guarantee from the EDC, laid off its entire workforce last week, including about 300 employees in Providence and more in Maryland. The state would likely be responsible for some of 38 Studios’ debts should it collapse.

The firm’s financial troubles came to light this month when it defaulted on a $1.1 million payment to the EDC that was due May 1. The company later paid — but only after first delivering a check that it acknowledged soon after would not clear.

I enjoyed his pitching - on the diamond, not when it turned to shilling for products or conservative politicians. Now we can expect many more curt statements in which his ideology and his self-interest trump consistency.

Good for Massachusetts, again. We didn't give into his pressure for a sweetheart deal.
Posted by lovable liberal at 6:49 PM 4 comments

A tight grip on your money

Mitt Rmoney's only objective is to serve his fellow plutocrats. If he had any other goal, he would have learned from his failure to deliver on his promises in Massachusetts.

Update (6/1): One upside for Rmoney about this. At least he's been consistent, which for him is miraculous. Consistently bad, but not flip-flopping on the bullshit, anyway.


According to the Rasmussen poll, just 36 percent of respondents say they are opposed to such a measure.

Unfortunately, it's exactly the same people who would never smoke it, who need to, so they can relax and let go of their overwhelming fears of brown people, secularism, and pleasure. Although psilocybin would probably be more mind-expanding for them (and they and we need for them to expand their minds)...

Given the workings of fear and the non-working of our political system, don't expect the time to come soon.
Posted by lovable liberal at 9:30 PM 0 comments

What they fear is true

Wingnuts have an emotional commitment to falsehood. Their heroes have implanted it by daily repetition.


Of all the falsehoods told about President Barack Obama, the biggest whopper is the one about his reckless spending spree.

As would-be president Mitt Romney tells it: “I will lead us out of this debt and spending inferno.”

Almost everyone believes that Obama has presided over a massive increase in federal spending, ...

But it didn’t happen. Although there was a big stimulus bill under Obama, federal spending is rising at the slowest pace since Dwight Eisenhower brought the Korean War to an end in the 1950s.

Wingers are also certain their taxes went up.

Fear is its own perverse logic. If they fear it, it must be true. The bogeyman lives!
Posted by lovable liberal at 8:00 AM 4 comments

But he knows Horace!

Hope "Lord Monckton" finds someone with scientific credentials to treat his Graves' disease.

Alternate title:  Master narrative vs. masters of the universe

In New England and the Mid-Atlantic, you can actually better yourself. In the South, not so much.

Liberalism works - unless what you want is captive, cheap help who won't get in your way.

Duhbya flushed our balanced budget, but on January 20, 2009, Republicans flushed that memory down the toilet. 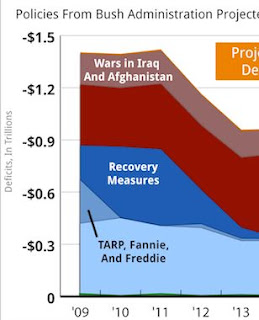 The GOP cares about deficits only when someone else is spending the money.
Posted by lovable liberal at 5:44 PM 0 comments

Not that Todd Willingham was Jesus, but he was murdered by the state of Texas after Gov. Rick Perry refused to reconsider debunked evidence and the conviction it led to.

Some of the harshest criticism in Baird's writing is directed at Perry. The governor's role in refusing to postpone Willingham's execution was closely examined by The Huffington Post during his presidential campaign.
"By 2004 there was no doubt that every single indication of arson had been debunked by the scientific community," Baird wrote. "This fact was staring Governor Perry in the face; nevertheless, he refused to grant a reprieve."
Perry has stood by decision when questioned previously about Willingham. His office didn't flinch from the latest criticism.
"Nothing the Austin court could have done would change the fact that Todd Willingham was convicted and sentenced to death by a jury of his peers for murdering his three daughters," said a statement from his spokeswoman Lucy Nashed. "He had full access to every level of the appeals process, and his conviction was reviewed and upheld by multiple levels of state and federal courts. ... The governor reviewed all of the facts of the case and agreed with the jury, and state and federal courts that Willingham was guilty."

The forms were obeyed - such as they are in Texas - so putting an innocent man to death is peachy. The Republican Party...
Posted by lovable liberal at 5:18 PM 0 comments

The AP asks, "Is GOP trying to sabotage economy to hurt Obama?"

You've been non-comatose for the past three and a half years, and you're just noticing that now!?

Republicans, Get In My Vagina! from Kate Beckinsale


You can tell from the front page that this is NSFW, right?
Posted by lovable liberal at 3:42 PM 1 comments

James O'Keefe continues to draw media attention with bullshit. He doesn't need facts. Truthiness is enough for someone who lies to the unwary for a living:


[T]he one instance in the video where O’Keefe purports to show that a non-citizen had actually voted, in fact shows that a citizen voted.

The episode does speak to a larger underlying problem with most accusations of voter fraud. It’s what I call the “Scooby Doo routine”. People like O’Keefe make wild voter fraud accusations like non-citizens voting, only to discover a much simpler explanation for the situation.


In his newest video, conservative videographer James O'Keefe claims that during his organization's latest inept voter fraud sting in North Carolina, "we found ballots being offered out in the name of the dead." Unfortunately for O'Keefe, the person whose ballot his operative sought is actually alive, as is indicated by the raw video his organization posted online.

No one should ever listen to O'Keefe lie, and that's his stock in trade.
Posted by lovable liberal at 1:04 PM 4 comments

Since it shows their bullshit for what it is, wingnuts will curse this:


Gov. Romney’s candidacy is an opportunity to take a closer look at the state that dare not speak its name. Through all the red mist and flying blue fur this election year, it’s worth reminding voters of a truth Romney probably won’t be emphasizing: The nation’s favorite punching bag is an exceptionally successful state. ...

[I]f America wants to be a healthy, smart, rich, globalized, high-tech powerhouse, we arguably have no better model than Massachusetts.

For many, a steady drizzle of mockery for the state and its “moderates” is the only response to that uncomfortable truth. Still, it’s hard not to dream of a presidential campaign in which a former governor would run on, not from, his associations with Massachusetts. Dukakis, of course, ran on a “Massachusetts Miracle.” But Gov. Romney is already too far from home for that, and probably knows better than to try.

I've hit all these themes, mostly in my obsessive commenting at the MetroWest Daily News (recently here), to the point that I'm sorry I didn't write the Slate piece.
Posted by lovable liberal at 5:17 PM 6 comments

Creative destruction of the truth

Afraid of their own amygdalas

Wingnut fear is the mind-killer:


That one ideological camp is so consumed with fear also has a lot to do with why conservatives and liberals share so little common ground. Progressives tend to greet these narratives with facts and reason, but as Chris Mooney notes, when your amygdala is activated, it takes over and utterly dominates the brain structures dedicated to reason. Then the “fight-or-flight” response takes precedence over critical thinking.

Fundies think they have a right to impose their backward and bigoted view of the world on the rest of us. They believe we infringe their religious liberty by disagreeing with them.

In short, they don't have the first clue what the First Amendment means.
Posted by lovable liberal at 2:58 PM 1 comments

Bruce Bartlett is the sort of Republican we used to have - a well-reasoned and analytical reality-based conservative. He can look at the economy and state without fear:


The reason that unemployment is high clearly has nothing to do with taxes. Consequently, there is no reason to think that reducing taxes further will do anything to raise employment by reducing the tax wedge.

There aren't many of his kind left, and most of them have been abandoned by the Teapublican extremists.
Posted by lovable liberal at 10:42 PM 3 comments

Update: The Republicans have finally gone so far into Calvinball that at least America's cartoonists have noticed: