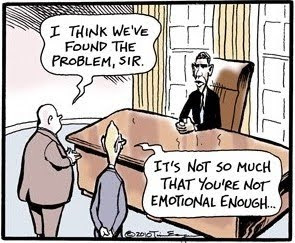 This cartoon is funny, but Obama's number one problem is not his intelligence. Instead, it's his unwillingness to continue the campaign in order to sell his policies to the American public.

He overestimated the constancy of the voters, thinking they'd stick with him for at least a while and underestimating the bald and immediate free fire from the right, explicitly stated as fed by the desire to make him fail, America be damned. Why he would suppose the electorate to be steady and patient is a puzzle. Maybe he projected his own rare virtues onto the rest of us. As a whole, we didn't deserve it.

Had he been out on the hustings from day one, giving recalcitrant opponents of both parties both the carrot and the stick, he would have done much better. There has been no price to crossing him, and there needed to be. As an aside, goodbye Rahm, don't let the door smack your ass.

Obama selling his policies directly to the people, modelled on FDR, would have - and still would - make Congress focus less on its internecine games and more on getting past the Party of No. The Blue Dawgs and the few remaining merely conservative, non-radical Republicans would have had to fear the center as well as the teabagging right. And that fear would have kept us from our present threshold of going back to the same craven jerks who screwed us up in the first place.