Straight from the horse's ass

Orrin Hatch sent me a letter on behalf of the National Republican Senatorial Committee (NRSC). Here's why they want my help:

[The Democrats] oppose all the values and principles you and I share.

I've said many times that Republicans are against the Constitution and the rule of law. I just never thought they'd come right out and say it. And it's flabbergasting that they have finally admitted that they are opposed to women's rights, minority rights, and equality under law irrespective of social class.

What are these radical Republicans running against? Hollywood, labor, environmentalists, and peace activists! Sure, they throw in some derogatory modifiers, but that's their plan:
They are running in favor of:
Here's part of the NRSC survey: 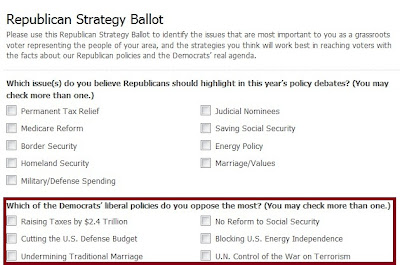 The highlighted Republican take on the Democratic platform is mostly a tissue of lies.
Ironically, the letter - which the GOP has cannily kept hidden - accuses the Democrats of dishonesty! Par for the course...
Posted by lovable liberal at 12:48 PM

I'm not sure if this will post twice. The internet collapsed on me while I tried to leave the last comment.
Essentially, I was trying to say was that the Republicans saying the Democrats are blocking Social Security reform is like the pot calling the kettle black.