Good to have allies


Income inequality has grown dramatically since the mid-'70s—far more in the US than in most advanced countries—and the gap is only partly related to college grads outperforming high-school grads. Rather, the bulk of our growing inequality has been a product of skyrocketing incomes among the richest 1 percent and—even more dramatically—among the top 0.1 percent. It has, in other words, been CEOs and Wall Street traders at the very tippy-top who are hoovering up vast sums of money from everyone, even those who by ordinary standards are pretty well off. 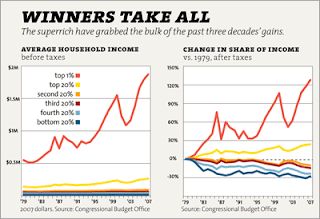 Kevin Drum asks the key question, "How did we get here?"  It's a question near and dear to my heart, one I first wrote about here in 2007 under that exact title.

Drum and I agree that the Democrats' surrender of social class has led to rampant plutocracy and to government policy that encourages huge growth in income disparities. We even agree in part about why.  Drum says:


Parties need money. And parties need organizational muscle. The Republican Party gets the former from corporate sponsors and the latter from highly organized church-based groups. The Democratic Party, conversely, relied heavily on organized labor for both in the postwar era. So as unions increasingly withered beginning in the '70s, the Democratic Party turned to the only other source of money and influence available in large-enough quantities to replace big labor: the business community.


Democrats gave up their unity voluntarily as a result of the marketplace, not of ideas, but of campaign contributions. They passed post-Watergate reforms in reaction to the financial abuses of Nixon's Committee to Re-Elect the President (CREEP), but they ran afoul of unintended consequences.

Democrats could no longer raise large chunks of money from wealthy ideological sources; they now had to spread their fundraising to wealthy business interests who were much more likely to play the access game.

Obviously, we find different causes.  Drum emphasizes the decline of organized labor.  I point to an unintended consequence of post-Watergate reforms in campaign finance.

One reason I doubt the union decline as the main cause - though any big change in society is bound to have many causes - is that unions remain to this day influential in Democratic Party politics, at least in states where unions have influence at all.  Their members are less reliable (ask Martha Coakley), but their leadership is not, and it's true that the disaffection of membership began during the social upheavals of the 1960s and 70s, exactly the right timing to help explain America's political degeneration.  So I'd have to concede that the union decline does figure in the decline of America as a liberal and forward-looking country.

Another cause I hadn't thought enough about is the retirement of the World War II generation.  Men and women who had been 30 years old at the end of the war were leaving the work force in 1980, just in time for the Reagan retrenchment.  It didn't hurt that he, as one of them, could co-opt them with his neo-1920s economic ideology and his sunny disposition.

Reagan said that government was the problem.  But he smiled.  And his age cohort, who had seen muscular government succeed at many things, could stop thinking about complicated problems and let go of the responsibilities that they had borne so well.

In any case, it's good to have Drum working this beat - strength in numbers and all.  Of course, that has been the promise of unions, a promise now forgotten along with the history of dire worker exploitation by the mercenary corporations of a century ago.
Posted by lovable liberal at 8:00 AM