In politics, as in any genre of entertainment, you always want to size the room so that your crowd just overflows it. That shows you're popular and yet realistic and leaves your audience demanding more. Mitt Romney in Detroit? Epic fail - a whole domed stadium for a few hundred people at most.

This is what a campaign looks like when it has more money than people. This is doom. Even in that tiny audience in that huge venue, the smell of flop-sweat must have been pungent. This is an off-off-off-off-Broadway show whose financial backer is so in love with the star that he can't grasp that there's no audience beyond the one-percenters interested in seeing this flip-flop revue.

Even if Rmoney gets the Teapublican nomination, the only campaign he'll be able to run is a B-52 campaign - scorched earth from 50,000 ft. at tremendous expense. Knowing Rmoney, he'll keep running the TV and radio and Internet ads until even his handful of ardent supporters are nauseated by their noxious smarmy gee-whiz omnipresent ugliness. The rest of the Teapublicans, less enthused to begin with, will depressively resign themselves to four more years of impotent misplaced anger for President Barack Hussein Obama. 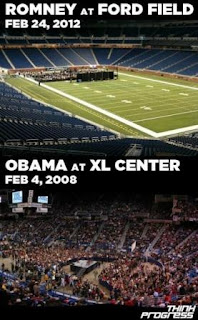 Thumbnail used under Fair Use, but if you own this image and object to my use, I'll shrink the thumbnail further.
Posted by lovable liberal at 4:09 PM